As third-party merchants on Amazon.com, we’ve seen some major changes on the platform over the past two years. While we have managed to stay afloat, we know many third party merchants have either gone out of business or significantly (unwillingly) downsized their Amazon operations. We’ve started referring to this time period as the “Chinese Invasion.”

For the past two years, but especially in 2017, there has been a massive influx of China-based third party sellers on the Amazon marketplace. This isn’t an accident, nor a happy coincidence, for Amazon. The company began heavily courting sellers from China in 2015.

It worked, too. According to an article on CNBC, sales from Chinese sellers more than doubled that year, sending total revenue at the company up 20%. Since Amazon is the most data-driven company in the world, it didn’t take long for them to realize Chinese sellers were one of the ways they would finally turn a consistent profit.

By 2017, Amazon could boast that 62% of China’s online merchants had set up shop on their site. There are so many of them, in fact, that Marketplace Pulse reports that 25% of Amazon’s 5 million third-party merchants are based in China.

Think about that for a second… One out of every four sellers on an American based e-commerce site live in China. That number doesn’t even factor in all the sellers that live in countries other than China. So over 1.25 million Chinese sellers are selling on Amazon.

Let me put that thought into a different context. In China, there is a company like our Amazon. It’s called Alibaba. Run by Jack Ma, Alibaba’s Taobao & Tmall sites are much like Amazon.com. Merchants stock the site and sell to China’s consumers and businesses. The Chinese market is twice the size of ours, so we are talking about massive sites with hundreds of millions of customers. Four hundred and forty-three million customers to be exact.

Guess how many US-based sellers sell on those sites? 7,000.

It’s not that we can’t sell on the Chinese sites, it’s that businesses usually cater to their own markets. As Americans, we understand how business is done here. We understand what customers expect and want. We don’t just jump into markets in other countries until we understand them. That is obviously not the case for Chinese sellers. And I would argue that this lack of knowledge about our  culture, our  way of doing business, is hurting our marketplaces.

There’s another reason we don’t sell in China – postal rates. Check back later this week for a blog post on how our own USPS has sabotaged American online sellers while giving an advantage to Chinese sellers.

You may be thinking that Americans just need to learn how to compete with the Chinese. That all is fair in love and war (and online sales). That American sellers need to stop whining and just adjust to the new reality.

You’re right. We’d love to compete. We know we can be just as creative and resourceful. Oh wait, we can’t. Why not?

Because Amazon doesn’t let us.

In the apparel category, there are very strict image guidelines. As recently as October 13, Amazon sent out an email with the following:

The email above only includes a partial list of image requirements.

Amazon has been sending those emails out for a year. Each time the “enforcement” date gets pushed forward. This last email in October is almost a cheery:  “Hey, fix your images AFTER Christmas. We don’t want to get in the way of your Q4 sales.”

Great, right? Not exactly. For at least 5 years Amazon has been trying to clean up the apparel category images. As a group (mostly Americans until recently) we have been threatened, had our listings suppressed and even suspended for infractions such as not having a “pure” white background.

I had a friend suspended during the first week of December a few years back because an image on a listing violated an image guideline. The listing wasn’t even hers – it had been created by Amazon themselves and she had simply clicked the “sell yours” button.

When Amazon threatens an American seller with suspension, we freak out. We have employees to pay and families to feed. We can’t just open another account. A closed Amazon account can lead to instant bankruptcy. Just ask SolidGoldBomb.

The Chinese sellers, though, don’t seem to be fazed by this. They just buy another account online. Yes, there are marketplaces for this. You can even pay with Bitcoin. In fact, some of them have hundreds of accounts.

So, I am particularly bothered by the sudden leeway in the dates to fix problems. American sellers have been abiding by the rules for years and all of a sudden pictures like the one below have a year to be corrected. 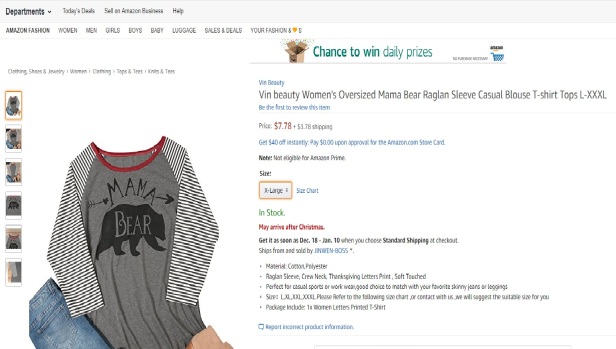 The “look” of that image is favored by Chinese sellers. Why wouldn’t it be? It is a great picture that is appealing to the customer. It does break several image guidelines including:

Here is another example. Amazon does not like it when you picture extra items in the main image. The seller has thoughtfully included a bullet point letting the buyer know that what you see is not what you get.

Below is another example violating multiple image requirements:

Here is one violating the multiple color requirement:

These aren’t isolated “accidents.” The vast majority of listings created by Chinese sellers in the apparel category have blatant image violations.

American sellers are abiding by the rules set forth by Amazon, yet a small percentage of Chinese sellers do. Why? Perhaps because the wrist slapping isn’t applicable to everyone.

It’s not just images, either. Check out the picture below.

Aside from the fact you get a baby included in the $11.89 price for an outfit, you should also make sure you only purchase from  FENGYUJI – their item is “Fulfilled by Amazon, 2 Days To Arrive, Fast Delivery. We provide you the high quality outfit and the best service, Please do not believe other”

I rarely believe “other” but I surely believe Amazon when they tell me I shouldn’t include shipping or seller specific information in my bullet points. Again, this is a common bullet point tactic for Chinese sellers.

Here is one that violated the no HTML rule in addition to wording that tells you it is coming from China and to please “wait patiently.” Again, these things are against Amazon policy.

The seller above seems to be quite fond of the HTML bullet points as well as keyword stuffing. Violations appear in the majority of their 5000+ listings. Yet they have accumulated almost 5,000 Amazon feedbacks and have been on Amazon over a year. Show me an American seller with that many listings with  violations with those stats and I’ll send you a free Amazon gift card.

These “tips and tricks” run rampant on Chinese seller listings, yet Americans get shut down immediately for the same violations. Check out the Seller Forums on Amazon for countless stories. Could it be that Americans just aren’t generating enough of a bottom line for Amazon to get a free pass?

Misleading and confusing listings are bad for the customer experience and bad for all sellers. As the Chinese take over the marketplace, customer satisfaction goes down. Take a minute to look at a few feedback pages of Chinese sellers.

Here are a few:

The themes in their feedback are very similar.

I’ve been selling online for over twenty years. My paypal account was actually created as an X.com account which tells you I’ve been around for a while. I’ve seen a lot of things happen and evolve. And one of my most vivid memories of selling online was in the mid-2000s when eBay started courting Chinese sellers.

Almost overnight, eBay lost American sellers and buyers. The once 800-pound gorilla of e-commerce fell in a spectacular fashion. The customer experience on eBay was damaged so badly by misleading listings, fake product images and delivery issues from Chinese sellers that customers left the site by the millions.

They went out and searched for an alternate marketplace to buy from. One that promised safe transactions with merchants you could trust. One that made sure you didn’t get swindled and that your packages arrived on time, One that monitored its sellers’ metrics so stringently that sellers were afraid to even look at a customer funny.

That site was Amazon.com. They swooped in and stole eBay’s biggest sellers by promising a site where everyone could compete on a level playing field. We Powersellers left eBay in droves.

We all know what happened next.

I’ve been seeing quite a few news articles in the past few months about Walmart’s marketplace gaining  ground.

Is history about to repeat itself?

One thought on “The Chinese Invasion: Amazon Courts Chinese Sellers & Then Lets Them Wreak Havoc On Their Site”